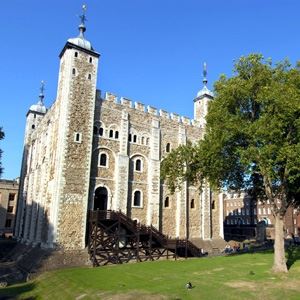 The White Tower
A castle built to strike fear and submission into the unruly citizens of London and deter foreign invaders - today you cannot miss the iconic White Tower, a symbol of London and Britain, overlooking the River Thames. Inside you will find the world’s oldest visitor attraction, The Line of Kings. A line of wooden horses, their garish colours and wild expressions somewhat incongruous in amongst the majestic suits of armour, this is the surviving remnant of one of the oldest - and oddest - collections at the Tower. From murky beginnings as the Horse Armoury it is part propaganda, part fantasy, and the longest running visitor attraction in the world.

Coins and Kings; The Royal Mint at the Tower
Originally located for over 500 years an exhibit devoted to telling the history of the Mint at the Tower. Explore six key 'moments' including Isaac Newton's efforts to rid London of counterfeiters when he was Warden of the Mint, learn of Edward I's harsh punishmentsfor people who tampered with his coins, Elizabeth I's restoration of the coinage following her father Henry VIII’s disastrous meddling, and Charles II's rejection of Commonwealth money.

Beefeater Tours
Share the secrets of one thousand years of royal gossip and intrigue with a Beefeater, or to give them their proper title ‘Yeoman Warder'. This body of men and women has guarded the fortress for centuries. Take one of their tours and you'll be amazed and possibly appalled by tales that have been passed down for generations. Pain and passion, treachery and torture, all delivered with their inimitable style!

This is just a taster, there is much more in the Medieval Palace, Bloody Tower, on Tower Green see the ravens and walk along the ancient walls.

From the 12th till 20th of February 2022 you will be required to select a timeslot for your visit.