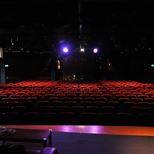 Main House Capacity: 400 Lounge Capacity: 70 "An unquestionably groovy place to be" Sunday Times LST is a magnificently restored theatre located in the heart of the West End with two exceptional spaces running a healthy programme of comedy, cabaret, dance, music and theatre. The 400 seat theatre boasts 2 bars perfectly positioned in the auditorium with newly-installed cinema style seating and a second intimate Lounge Theatre with a capacity of up to 70 with its own bar and cabaret-style seating. The theatre was reopened by Lesley Ackland and Martin Witts in August 2008 with a 12 week run of motor mouth US comedienne Joan Rivers... soon establishing itself as one of London?s foremost comedy venues playing host to the major comedy talent of the today including Bill Bailey, Michael McIntrye, Joan Rivers, Roseanne Barr, Sandra Bernhard, Mark Little, Julian Clary, Russell Howard, Richard Herring and annual seasons with Doug Stanhope and Stewart Lee. The theatre has an illustrious history as a live music venue. As the Cavern in the Town in the Sixties, Beat group The Small Faces had a regular residency. In the 1970s, as the Notre Dame Hall, The Rolling Stones played there along with The Who. But punk ruled supreme and the venue hosted some riotous early landmark gigs by The Sex Pistols. The Clash previewed their London Calling material there in 1979 before recording the seminal album the following month. Therefore it wasnt long before music started playing a vital role in the theatres programming. Macy Gray, Boy George, Tommy Emmanuel, John Mayall, Michael Feinstien, Dame Cleo Laine, Hazel OConnor, David McAlmont, Ruby Turner and Tony Christie are just a handful of names that have played the theatre in the last few years.

The venue is in central London so it is advised to use public transport where possible.

Nearest Parking is in China Town - http://www.q-park.co.uk/parking/london/q-park-chinatown There is no parking in Leicester Square.

Guide Dogs and Hearing dogs are permitted in the auditorium (please inform the venue before), they can stay with you during the performance or a member of staff will be happy to care for your dog.

Should you have any access requirements or disability that requires any assistance in access then please contact the box office directly to arrange your booking. The number is 0207 5341740.